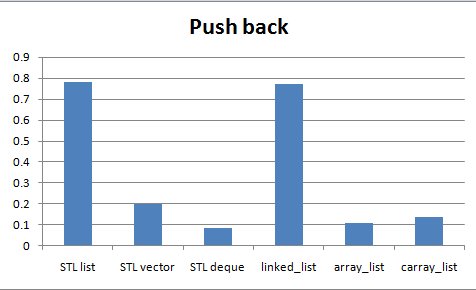 STL (Standard Template Library) adds containers and algorithms to the C++ language. There is no equivalent library in the C specification but there are a number of available libraries that provide common data structure and algorithm implementations which may be used in C programs. Once such library is gnulib which provides, amongst other things, implementations for common container data structures such as lists and trees. This post provides a quick comparison of the performance of a number of the gnulib list implementations against the performance of the STL list implementation. For this analysis, gcc v4.0.1 using -O2 optimization and the gnulib source from June 13th, 2009 were used.

The Benchmark
A very simple benchmark was chosen for the performance characterization. Two operations were measured. The first was the insertion of a large number of integers into a list, with the integers being added one at a time to the end of the list. The second was the searching for elements within the list. It is acknowledged that these are very simple tests and that any results are somewhat inconclusive in the absence of a larger and more thorough suite of performance tests.

The comparative performance of the relevant STL containers that are most similar to the gnulib list containers other than the gl_linked_list will be provided in a follow-up post.

Finally, the tests were run on a Macbook running OS X 10 with a 2.4GHz Intel Core 2 Duo processor with 3MB L2 cache and 2GB of RAM.

The normalized results are shown in the graph below. 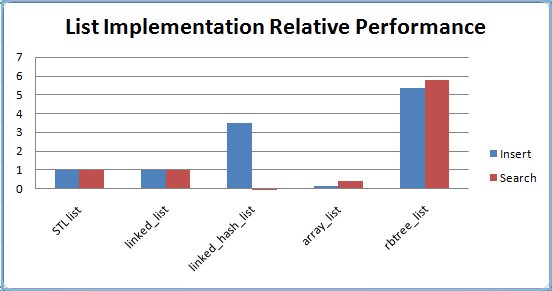 Conclusions
The pure linked list implementations of both STL list and the gl_linked_list are almost identical in performance for both tests.

EDIT: The original intent of this post to compare an STL list against the full suite of gnulib list implementations was deeply flawed. The gnulib “list” interface is closer to the more generic STL sequence interface and a more correct and complete comparison would be to compare the gnulib containers against the STL containers. This will be a focus of a follow-up post. I’ve edited this post to clarify the comparison in order to avoid confusion. While I realized my mistake shortly after publishing the post, I was happy to see that this was also picked up by several readers – so many thanks to those of you who provided comments for keeping me honest!

Previous posts have mentioned the Visual C++ 2008 feature pack which was available as a beta release. The full version has been released and is available for download.

The previously reported bug with array::max_size() has now been fixed.

Some TR1 related resources from Microsoft:

Microsoft have recently released a Beta version of the Visual Studio 2008 Feature Pack which includes support for most of the C++ standard library extensions described in TR1. Alas, the beta sticker is appropriate as there are still some bugs to be ironed out.

The TR1 array container template provides functionality for implementing a fixed size array. This is a halfway point between plain old C style arrays and C++ STL vectors. The defining property of the array container is that its size is fixed. Consider and example of an array of 4 integers

Since it adheres to the STL container rules, it must implement methods such as size(), and max_size(). For the array container, both of these should return the size of the array, which is fixed. In the above example, both should return 4. However, when using the VS 2008 TR1 implementation of array, a bug appears. The code:

#include
Produces the output:

size_type max_size() const
{
// return maximum possible length of sequence
size_type _Count = (size_type)(-1) / sizeof(_Ty);
return (0 < _Count ? _Count : 1); }[/sourcecode] Instead of simply retuning N (the size of the array), it performs the same computation as if this was a vector. This issue has been logged as a bug with Microsoft and will hopefully be fixed before the "Gold" release of the feature pack.